Talkin’ Tides
Boat-Friendly Recipes
What to Pack for Your Next Boat Day
The Benefits of Boating During the Winter
Best Boating Destinations in Northeast Florida
What are the Best Boats for Watersports?
What You Should Know About Change & Times...
Is Co-Owning a Boat a Good Idea?
Prevent Boredom Aboard
Best Boating Apps
Home Community Involvement Getting the Boatanista Trademark
Community Involvement 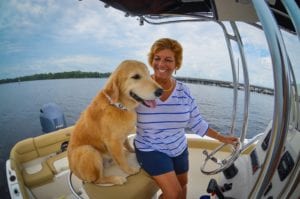 Coffee shops have baristas and clothing designers have fashionistas. But there is only one Boatanista on the planet. And Lisa Almeida has spent a lifetime proving that she is worthy of the moniker.

Apparently, the U.S. Patent and Trademark Office agrees. This month, Almeida was awarded a trademark for “Boatanista.”

But long before her nickname became a legal trademark, Almeida, co-owner of the two Freedom Boat Club franchises in Jacksonville and St. Augustine, was widely known across north Florida as the Boatanista. She has been using the nickname in radio commercials and various marketing efforts.

“A few years back I was talking with Holly Ackoury from Rooks ad agency,” Almeida said. “And as we were discussing all the events and activities I was working on – all involving boating – she blurted out, ‘You are the Boatanista!’ It stuck.”

In short order, Almeida went to work on a logo and definition for her alter-ego: